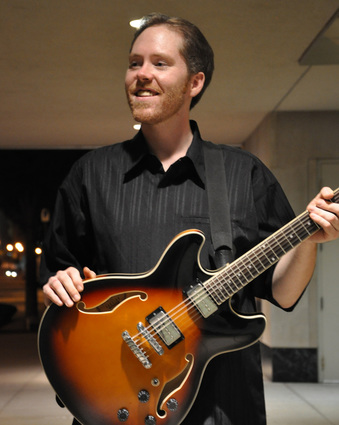 As a dynamic blues performer, Garrett “Big G” Jacobson has been satisfying audiences since 1998. His recordings have received critical praise in such publications as Living Blues, Blues Revue, Blues Blast and Southwest Blues. Having performed at numerous festivals, clubs and casinos throughout the midwest, he has been featured at notable venues such as Buddy Guy’s Legends, The Chicago Blues Festival, Kingston Mines in Chicago, IL, The Grand Emporium in Kansas City, MO, and B.B. King’s Blues Club in Memphis, TN. He has also performed with blues greats such as Jimmy Johnson, Carl Weathersby, and Smokey Wilson. His latest CD release, In Person, captures the feeling and energy of his live show—Garrett and his tight working band serve up an offering of soul-blues with the spontaneity that only a live recording can capture. With his distinct guitar style and soulful vocals, Garrett Jacobson delivers a soul-satisfying show not to be forgotten.